Getting To Know Bow Thayer 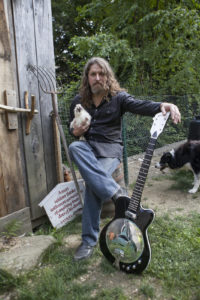 Bow Thayer is no stranger to the Vermont music scene.

What started out as small “picking parties” with friends in the backyard of his house in the late 90s evolved gradually into the Tweed River Music Festival, of which Bow was the founder. His love of the region is extremely apparent in both the depth of his music’s natural and homey tones, and the poetry of his lyrics.

Thayer is known for his musical inventiveness, and the blending of different genres such as classic rock, punk rock, singer/songwriter, jam band, jazz, bluegrass, and old-time music. Additionally, and perhaps most notably, Bow is known for the creation of the Bojotar—a blend between a banjo, an electric guitar, and the Dobro—essentially, in Bow’s words, “a banjo with an extra low string, or a guitar with the low E taken off and a banjo string added.” 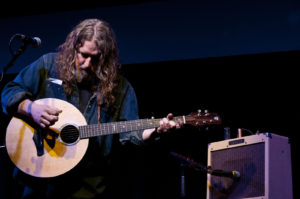 In Bow’s latest album, Sundowser (2015), the magic of the Bojotar is on full display. Adding a new, yet eerily familiar twang, the hybrid instrument perfectly compliments the earthy, warm, atmospheric, and toe-tapping vibes of Thayer’s rich melodies. It’s a cool instrument whose popularity seems destined to increase—Bow joked, if you come and see him play the Bojotar at the Skinny Pancake Hanover soon, a few years from now, “when this thing really blows up, you can say you saw it first!”

American Songwriter describes Bow as the “best artist to come from New England in recent years.” From the first time we saw Bow play (at an event at the King Arthur Flour headquarters in Norwich, VT, while serving up crepes from our mobile station) we could clearly see why.

Bow has graced the stage with artists such as John Hiatt, Richard Thompson, David Lindley, Edgar Winters, Joe Walsh, Booker T. Jones, Levon Helms and more… Although, he notes, quite humbly, he was “just the opening act” for most of them. 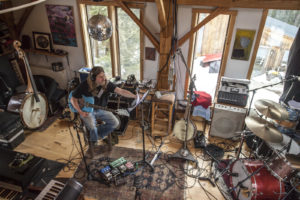 Bow is based out of a recording studio he built out of hemlock trees he harvested off of his own property and timber-framed himself, spending money only on the metal roofing covering the structure. The studio is appropriately fashioned with solar panels for all of Bow’s musical energy needs to boot.

It was from this remote studio along the White River that we had the chance to catch up with Bow, and chat with him about his residency at the Skinny Pancake Hanover:

Skinny Pancake (SP): Given all the entertainment distractions of the modern digital world, how important do you think it is for people to go out and see live music these days?

Bow Thayer (BT): It’s really hard to try and keep live music going, and there’s probably many factors to that… One being that there’s so much entertainment right in your house, and even now in your pocket on your phone. There are things that are distracting people these days from going out and committing to seeing live music. Most people would agree it’s very, very important to have live music, but it’s not on people’s priority list, and there’s just so many other things in competition with it. That’s why I think it’s so cool to have a company like the Skinny Pancake that’s actually going the extra mile to bring live music out to the community.

SP: How do you think food and music work together?

BT: They’ve gone hand-in-hand since the beginning of time. There’s always been that correlation; look at BBQ and the blues… I think you’re really onto something here… I could go on and on about certain metaphors and all this stuff, you know? Music is food for the mind, and blending the two just go hand-in-hand. Feed the body and the mind at the same time!

SP: What do you hope to get out of your residency at the Skinny Pancake Hanover?

BT: The whole reason I want to do a residency is so I can go work my music out in front of people! I could sit here [in my studio] for 14 hours a day, figuring it out here and recording it, but it doesn’t mean anything unless it’s in front of people.

The people who have been coming to the shows so far sit right down in front and listen… And I don’t care if there’s 2,000 or two people there, I’m going to do the same thing. It’s just so important to have a live audience that you can, on a regular basis, go and work stuff out in front of.

So, I’m already getting everything out of this residency with the Skinny that I could want, and that’s a consistent place to work on my musical ideas, in a live format!

SP: You’ve played at a lot of different places throughout your musical career. What makes playing at the Skinny Pancake special?

BT: I feel really comfortable advertising to my people who have enjoyed my music over the years to come down to the Skinny Pancake. It’s cool. It’s a young, energetic staff, it’s friendly, the food’s good, it’s comfortable, there’s a great selection of drinks, and it SOUNDS GOOD. Honestly, I can’t say that about a lot of the places I’ve played. I’ve got people who like to come up from CT, NY, and MA, and it’s so important to have a place that is quality. If I am going to put my name out there and inviting people up, it’s got to have quality, and the Skinny Pancake is just the right blend of all of it.

SP: What’s your go-to crepe and drink of choice at the Skinny?

BT: Anything with a buckwheat crepe shell! I’ve had most of the food on the menu, and it’s all wonderful. I’m one of those dudes who can’t really eat wheat anymore, so the menu is perfect for me… And the local ciders, particularly the Eden Cider, I’m addicted to! You’ve got food I can eat, it’s healthy, and the staff is awesome! It’s totally cool. 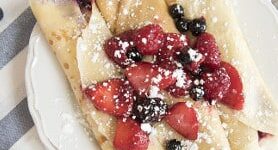